This past Friday, local artist and friend, Liz, and I took a trip to a nearby wildlife refuge called Whitewater Draw.  I'm not sure how it gets its name, as there is no white water (rapids) there.  However, it is a well-known destination for human, bird and mammal gatherings.  Our purpose:  sunset photos.  Liz has already shot some beautiful photos of the area, but luckily, she was up for another trip.

The weather was glorious - warm and sunny, with no wind.  No clouds, alas, but that ended up being not a bad thing.

Whitewater Draw is located in the basin area east of the Mule Mtns. and west of the Chiricahua Mtns., and near the towns of McNeal and Elfrida.  It's a quiet, unassuming place, and it gets much of its water from the drainages from the eastern part of the Mule Mtns, including the creek that runs behind the motel.  Its biggest attraction is probably the large numbers of sandhill cranes that spend part of their migratory path there, but it attracts countless other species of waterfowl as well.  We had both heard that the cranes were gone for the season, but that didn't deter us.  I was interested in getting some reflected light from the sunset, since there are no other bodies of water nearby.

It is a birder's paradise:  shortly after arriving, we discovered the horned owl that roosts in the rafters of the large shelter on the property.  After giving me an intent, contemptuous stare, he turned his head, and flew off before I could get a photo.  My first live owl sighting, too!  The ponds and sloughs had many species of ducks, and we saw a tall, slender white bird poised motionless in the shallow water - probably a stork of some kind.  And - sandhill cranes!  Hundreds of them, sitting or resting or roosting or whatever it is that they do, along a distal part of the preserve at the edge of the water.  Sandhills are large birds, about 3' high, and grey with black tipped wings.  We also discovered a small cluster a bit closer, although a telephoto lens would have been in order to get any bird-focused photos.

So, in these photos, the birds aren't the main attraction; they are more akin to the back-up singers in a band, since some of the photos just wouldn't be the same without them.

I hope you enjoy this selection of evening and sunset photos taken this past Friday at Whitewater Draw: 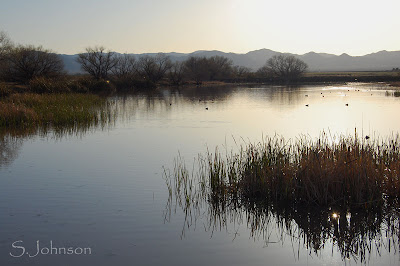 Late Afternoon
The calm water in this pond reflects the fading afternoon light, along with the distal trees and proximal grass.  A smattering of small ducks can be seen as well. 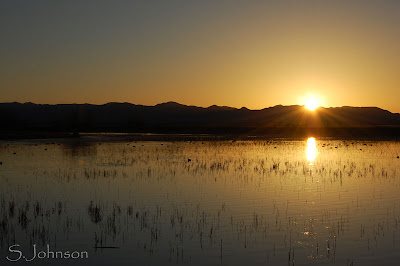 Sun Sets over the Draw
The eastern Mules are the backdrop as the sun casts its setting rays across the water. 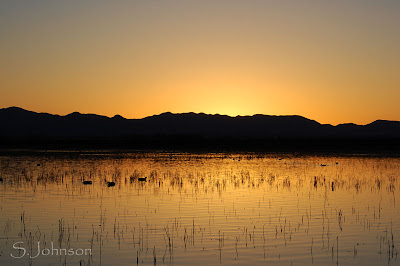 Evening Tranquility
A trio of ducks enjoy the calm waters of the draw. 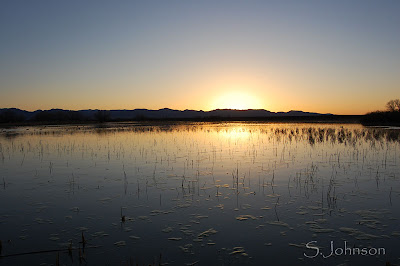 Sunset Glow
The warm rays of the setting sun cast their reflections on the water in this wide-angle shot. 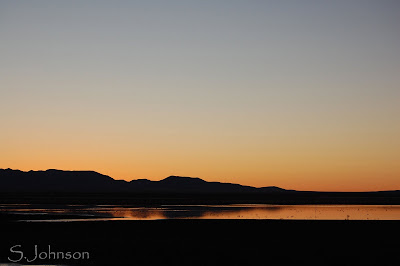 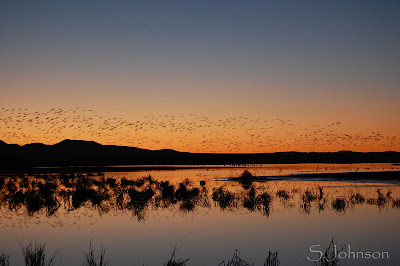 Evening Flight
Hundreds of sandhill cranes take to the sky as the sunset deepens it to a brilliant orange.  Their reflections form an interesting pattern along with the vegetation in the mirror smooth surface of the water.
Posted by Sonya Johnson at 6:28 PM

Your thoughtful comments add value to this blog - thank you so much for taking the time to leave them!

Sonya Johnson
After retiring from a brief career in medicine, I became a painter. In 2011, I started plein air painting, and now I paint on location most of the year. I am an avid hiker and traveler, and my camera and easel are always with me to capture the unique beauty of the Colorado Plateau landscape, along with its flora and fauna. Thank you for visiting!

Other art blogs, websites and links of interest